I simped josuke the entire time, the kissing face at the end scared the shit out of me tho.  honestly the art was good and this is great for anyone who wants to just fuck around and get some good joestar romance in their life.    bruh Dios suit tho ... ??? crusty

the fact that i even played this just confirms that i am, indeed, JJBR trash. 10/10 would try to date Jotaro (and fail without knowing what i did wrong on my 1st try) again lol

I really would love to play this game but the app won't open, i hope that anyone could explain why this is. :(

You need to extract the files from the zip to play.

I did extract them, i even got the app to play them and it didn't even open. ;_; [ sad ora noises]

What do you mean by "app?" I think you only need an app like winrar or 7zip to unpack it? Try first of all things to right click "JoestarStruck.exe" in the folder and select "Run as administrator."

Oh!, i did unpack the files and tried to run it as an administrator. I got a folder named joestar struck and i tried to run the joestarstruck.exe thing,but every time i tried it didn't open or work..

Please, I beg you, add more content about Dio!! I need this

A zip file is basically the file or files your need, all in one package. It makes distribution easier. To unpack it, you need a special program, like 7Zip or Winrar. Both are free, though I recommend you use Winrar. It is waaaaay better and doesn't corrupt your files as much. (Don't worry about "having to pay a licence," no one does that, it's a meme at this point.)

what if you have a mac cpu??

Hi, I can't seem to get the game to load. Says its missing a SDL2.dll file. Any help?

Check if you have the latest update for windows/mac/linux. Unless you have a really old version, like Windows 7, it should work. Try to uninstall and install it again. If it still doesn't work, here you have a guide on how to solve the issue regarding the missing file. It's pretty straight forward: either it teaches you how to download the file or how to repair the game. Hope it helps!

Hi! I really like your game and i wonder, will there be any updates or the game is finished? Because this is the only jojo romantic novel i have found.

ps : if anyone knows any other jojo romantic novels can you please tell me?

ps2: sorry for my bad English bc it's not my first language

Hello!! Myself and my friend have been playing Joestar Stuck and we love it but we are having trouble getting some of the art and I dont know what we are missing! Do you have a guide at all or can you offer any help! We love this game so much and would love to finish it all!

In my opinion we should've become the friends with jonathan and not get in a relationship with him, ya'know that's kinda creepy

Im so confused... how do you actually play the game, Ive been trying to open the goddamn file for 30 minutes, but I can't. Maybe I am too stupid for this lo

Update: I figured it out, but when ever I try to open Joestarstruck,exe, it says that it couldn't open and it was missing or something...

Did you figure it out? Can you please help me, I don't know how to open the file.

please for the love of God, have more of Dio. Id love to see some spicy action with that.

Downloaded the game twice now, and still only get the Demo for josuke? Am i missing something lol

is there a spicy ending? Asking for science purposes

that was super gay

gay for u- wait what

okay so this is awesome!! ive gotten all the good ends, and bad ones now i just have to get the neutrals. i love jonathan alot already so this may be biased but he is so freaking cute in this omg!! thank u guys so much for taking time out of ur lives to make this! i hope this isnt all that we will see from u all!! i literally love this sm!!

Oh God, could you please share how you got the good ends?? I only achieved one with Jonathan!

(I copied and pasted this, because I just answered someone else's similar question)

What I did was choose all of the "polite" dialogue choices, sat in the front of the class, stayed after class to talk to Jonathan, then stay during lunch. Then, I chose not to hit snooze so that I could get to class early and talk to Jonathan again (Tell him that you came to report back on the mission). When he talks about how boring he is, tell him that there's nothing wrong with being boring, and then when you get to the beach and sit down with him to read a book, tell him you're smiling because you're happy. At the football game, tell him the truth, and then later on, tell him you came because you wanted to spend time with him. That should be it! :D

I download the game but when I try to open to won't let me play please tell what I can do also I on a Acer Chromebook 15 will it work?

Idk it won't allow me either

Hello! For the cosplayers between us, is it possible to cosplay the characters from your design? With credit ofc!

Hello I'm the sprite designer. And I'd love to see you cosplay my designs.

Omg i cant believe im seeing this comment only nowwwww

Tysm for letting me cosplay it!! I honestly adore what you did in the game 💕❤

I did dio for now, and working on jolyne next!! Hopefully soon

My insta acc is @lacroixshoots, if you want to be mentioned there (I already mentioned the game and team) send me a message please 🙏

Hi! Im having problems with the download: its downloading but then when is done it says "failed - download error". I tried so many times but I dont know whats wrong. Help please!

I’ve been trying to figure this out for a while now. Do you play as a boy or a girl? (or neither) spoiler: Like at the beach and stuff you stare at joseph‘s shorts, and you say «Where did you even find it? It’s amazing! I have to get one like it». I don’t think it’s that normal to tell a man that you want a swimsuit that looks like his. Also it says that you walk over to change into your swimsuit, not bikini or anything. And Joseph’s trousers are also adressed as «swimsuit» so thats what confuses me.

this game is for real incredible thank yall so much for putting all this hard work into such a fun game, I absolutely LOVE how you even went through the trouble to make a bad ending with Kira... Yall I love this game so much thank you to everyone who worked on it, this is incredible ! ^^ 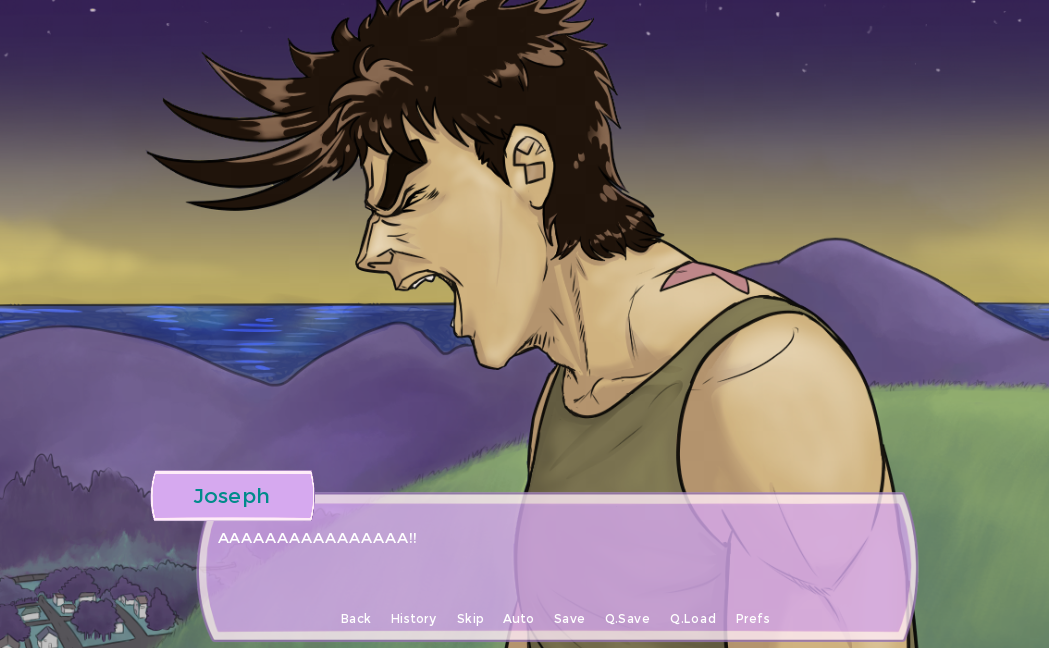 then dont play it lol, most of us jjba fans are just happy for the content. realize this is fan made and stop being so rude

OH MY GOD PLEASE SOMEONE MAKE A WALKTHROUGH
I've been trying to get Joseph's, Jotaro's and Josuke's best endings for like half a year! This is driving me crazy!
P.S. The game is absolutely amazing and all soundtracks are just *chef's kiss*

HOW DO YOU DOWNLOAD THIS USING LINUX!!! PLEASE HELP MEH

I really enjoy this game but- the models look really weird sometimes. It makes me just uncomfortable.

Is Kira going to be added again? I never got to play his ending :P

i think he's still there

is he random chance then?

Nope, you have to take Josuke's route and then go to  throw garbage (i.e. while cleaning a classroom) alone. You'll meet Kira there.

which file is used to launch the game?

i wish this was free

It is, just go straight to downloads.

Okay but Joseph's route had me like "omg, what am I gonna do when I graduated ?" And then I remembered that I already did lmao

Can we have a Caesar route too? I mean, he is not a jojo and this is mostly about the jojos, but i like Caesar and i want him to have a route too! Also, what if you guys could make a Kakyoin one and Dio? Please. And Jolyne idk, i don't realy care about her much, but it would be cool to see it. Btw i did all of them and i liked it a lot! Thank you for making this! 😊

i dunno though, but id also like to see a Caesar route

I think i did all the routes

is there routes for Kakyoin, Caesar,and others? (also you guys should add kOICHI and more :)))

also is there any routes i missed

How do you get the Kira bad end? I can only get Dio with Josuke's route. I'm trying to do all the endings and this is the only one I think I'm missing.

For the Kira one, you need to choose the option to pull away from Joskue when you're cleaning up the mess he made in science class. When you take out the trash, you cut your hand and Kira asks you if you need help. Say yes and the ending will play out from there.

how did you get Jonathan good end???

theres no specific thing that gets you the good jonathan end from what i can tell (like for example, kiras). but, the only thing i did different from my 'Out of Sync' ending from the good one was telling him what happened with dio? other than that, just pick everything he seems to like but doesnt make him uncomfortable, etc

why is everyone so ubsessed with dio giving them the succ. I want jonathan to give me the succ. Im not even done with the series yet, and dont know half the characters i see in the comments but the first part was the best :)

Hey i have a question. When i downloaded the game i was told i need a program called "winzip" and in order to use the program i must pay. Is it normal for this to be needed.

it's called win.rar and yes it is

also you don't need to pay, it'll just remind you from time to time

thank you. follow up. when i open the file for the game it emedietly tells me i need this thing i was wondering how i get in

By time to time he means every time

Yes and it's annoying but what can we do--

You need to be in Josuke's route. When you are cleaning the mess he did in the laboratory, take your hand back, then you will go and take out the trash. Kira appears here. You cut your hand and Kira offers you his help, and you have to accept

Can you go after ceaser, hes my best boy.

Is there any nudity in this game?

Is not. Only if you consider the beach trip part. You will see what i'm talking about.

I have a chromebook and I'm trying to figure out how to play on it....

I'm having the same problem, Did you figure it out? Can you help me